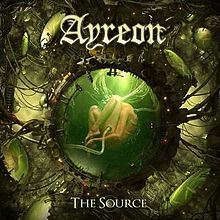 Last night I was side kick on Into The Mirror Black, next to my wonderful DJ Morgana. We had an interview with Arjen Lucassen and a showcase of the forthcoming Ayreon album The Source. I had a great time, we had a great time – and we’ll do this again.

Does that mean my own show will stop? No, of course not. But there will be some changes in other areas. My reviews have become very infrequent and that is how I feel about reviewing right now: I’d rather enjoy the music and write she. I feel like it, without the pressure of ‘having to deliver’. So there will be a few more soon, for Background Magazine, but after that I’ll go back to doing it on my own. No pressure, and only do it when I feel like. And as for the 100 words? That will stay, because it’s a nice way of writing about the essence of things. And it allows people to get an idea of a album, and then go straight to the music.

So, leaving planet Alpha and on to planet Y, for a new dawn. Not through the black hole, but Into The Mirror Black….

Although I started carefully, by offering to do this once a month, I quickly changed my mind. From this week onward, I will provide a weekly playlist to ISKC Rock Radio, which will be played on Wednesday evening between 9PM and 11PM.

The playlists will sometimes deviate from the ISKC standard, in the sense that I record interviews with artists every once in a while, and these will be aired as part of the playlist sequence as well when appropriate. Keep an eye out for those, if all goes well we’ll be featuring a Silhouette interview next week and one with Kristoffer Gildenlöw the week after.

My playlist for this week, Wednesday September 2nd on ISKC Rock & Webradio is included below.

Sometimes it is interesting to take a little side track. This site is mainly about progressive music, as I state on the about page – and that leads quite quickly to progressive rock. However, sometimes it’s good to refresh your mind and venture outside the regular. So, today I publish an interview that I did with a band called The Royal Spuds, a punk/folk band from Leiden in The Netherlands. And surprisingly, there still was a progressive link there. The band consists of members with different backgrounds, leading to influences from folk, punk and metal in their music – the lead guitarist turns out to be an actual Porcupine Tree fan…

So, on a Wednesday evening, we sat together in the Muziekhuis (music house) in Leiden, and talked about the history of The Royal Spuds, the background of the band members, the pending tour in Ireland – with a short side track into Irish food and banjo players here and there. As usual, we also touch upon production and composition, to make sure the balance between history, humour and music is correct.

Tonight I got a few reports from people who were not able to properly play the interview I did with Karibow. Turns out the server that hosts my blog doesn’t really keep up with multiple people streaming audio in parallel. That is solved now in a way that I had in mind already, but hadn’t gotten around to implementing yet. The interview audio files are from now on hosted on Mixcloud, and links to the Mixcloud streams are included in the blog posts (all are updated already).

So for those who want to listen to an interview, you now have two options:

1) Open the blog post on this site, and play from the widget there, or

2) Go to my MixCloud profile where you can choose from all interviews I uploaded.

During the Night of the Prog festival on the Loreley in Germany, I found some time to have a coffee and a chat with Oliver Rüsing and Gerald Nahrgang. One being the guitarist, vocalist and founder of Karibow, and the other being the band’s drummer, there’s no guessing to the subject of the interview we did there.

Karibow have been about Oliver Rüsing’s musical work since 1997, although between 2000 and 2011 he mainly operated on his own. In 2011, the album Man of Rust won an award from the German Rock and Pop Musicians Association, and in 2014 a similar honour, the Best Progressive Rock album in Germany award, was given to the band’s most recent album Addicted. An album that made Oliver set up a real band again, for live playing, but also with an eye on a new album that is already in the making.

Addicted, contains 16 tracks, and can be found on the border of prog and AOR. The tracks included were a deliberate selection out of 60 tracks that were available for the album, the others are still waiting for release. The album may not meet all ‘definitions’ of a full prog album, for Karibow musical quality in the form of composition and melody come first. The complexity may be hidden underneath that and not be obvious at first. As drummer Gerald indicates: “It’s hard work for me as a drummer. At first you don’t notice, but there are odd meters everywhere”. The two men don’t believe in progressive rock being a cage, in the end it’s about music, about ideas developing in a song, not about fitting a definition made certain listeners.

From this, in the interview we took off to discussing the album, the way of composing that Oliver applies and how that differs from what e.g. Genesis did in the past. We also touch upon loudness war, short sound clips that make up modern pop music, and the next album that Karibow is working on.

I had an interesting morning, and preparing the audio track of this interview made me think about the next one already – I hope you enjoy it as much as I did.

One of the first albums I reviewed this year was Peter Jones‘ album Cocoon, released under the name Tiger Moth Tales. The day before this audio interview is published online, he release his second album, Story Tellers Part One.

In the interview, Peter briefly (re)introduces himself, telling how he was playing in bands and plays when growing up, and starting 2 To Go with his friend Emma Paine. They played clubs and pubs, which they still do sometimes.

After releasing a solo album with ‘contemporary adult music’, Peter started writing down ideas he had, which eventually led to the album Cocoon. This album has been quite successful given the niche it was released in 6 months ago, and in the interview Peter tells a bit more about how it came into being and what happened afterwards.

After that, he explains how the quick and largely unplanned successor Story Tellers Part One came to the play, which is quite a surprising story in itself – as story teller Peter will let you hear.

To close it off, we talked about future plans, like new albums, the possibility of touring and a cooperation Peter has with English instrumental prog band Red Bazar.

It’s been a little over a month since I posted an overview of most popular blog posts here. So here’s the new set. I left the home page in this time, because it belongs in the list. After all, from there people click further. Also there are less tracks of the day in the list this time, because they appear only twice a week, to create more room for album and gig reviews.

Happy reading, if you find something here you’ve not seen before.

These are the 10 most popular entries on my blog over the past 30 days. Great job by Unto Us – this is the only audio recording from their album that is available online as far as I know…

Yes, I know, it’s already March 3rd 2015, and this interview should have been published 2 months ago. No need to argue about that, it’s published now – and it’s a load of fun to listen too. More details below the picture…

On December 23rd, 2014, I spent a total of two hours on a Skype connection with Colin Tench, guitarist of BunChakeze, Odin (Of London), Corvus Stone, Minstrel’s Ghost, Oceans 5, Colin Tench Project, and a few more new projects coming on this year. Ok, since you asked for it: Transmission Rails and Coalition. Last week, he concluded that he had been working non-stop on recording and mixing music for three whole years, in his snow cave somewhere in the (at this time of year still) freezing cold heart of Sweden. In this interview, he talks about how he ended up being a progressive rock fan and guitarist, how it could happen that the BunChakeze album was released just 25 years after being recorded, and what happened after that.

In passing, he addresses the importance of the internet and social media for modern independent music. In fact, without the internet, he probably would never have found the driving force behind his main project Corvus Stone – a force that is not a musician… Indeed, he is talking about Sonia Mota’s art work, this time without referring to her bum.

Overall, these were two hours well spent. As you may notice, the recording here only covers just over 50 minutes. Reason for that is that we covered some other topics, which are not directly related to Colin’s own work – these will be published in a separate, written article some time in the coming two months.

Happy listening – and please share this interview if you like it. That will encourage me to do more of them.