Today I had a discussion with a friend on how people listen to music. There’s a lot of rock and metal music being released under the moniker ‘progressive’. Regardless of how fitting that moniker is (complexity and experimentation does not always mean that the music is ‘progressing’, pushing forward the boundaries of music), it’s a fact that a lot of this music is not something you grab on first listen. It takes at least a bit of time and effort to get into it, to give it proper listen and let it sink in. This is no different with the album All is not for All, released a few months ago by Anuryzm, a metal outfit hailing from the United Arab Emirates. [acfw id=2] 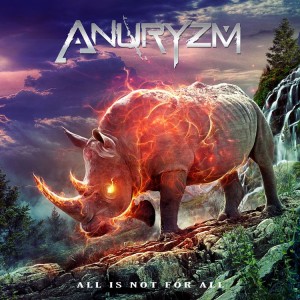 Anuryzm is headed by guitarist John Bakhos, and is the spin off of a cooperation he started in Lebanon in 2003. After moving around the world a few times and working with various people, he found a stable line up, which released Worm’s View in 2011. That album introduces Worm, a character that returns in the well executed artwork of the new album All is not for All as well. He seems to signify everything that modern man stands for, including all the mistakes we make and the risks we run. That, combined with lyrics, which deal with topics like nanotechnology, illness, extraterrestrial encounters and many others sets a bit of a gloomy story behind the album – “a warning to both the “Worm” and mankind to figure out their priorities and may the better side win.”

A somewhat disturbing message, but looking at the world today, one vested firmly in reality.  A complex reality, which leads to lyrics that require proper reading in the context of the above message in order to grasp them, and music that fits with it.

Now, that may come across as pompous or bombastic, which is not my intention, so lets put our feet back no the ground and look at the music on this album. Aneurysm can be found on the web described as power metal as well as thrash metal. Neither does full justice to the music, which is a blend of various things found in the different kinds of metal music around.

The opening track Mineral isn’t metal at all – it’s low power, melodic, with a very well played bass line (by Michael LePond of Symphony X) and powerful but melodic vocals by Nadeem Bibby. The big surprise is the in your face metal guitar riff that immediately follows it, the opening of Full Agonist. That track is a fast, driven metal track, where vocalist Nadeem shows that he can sing, scream and growl and switch between the three effortlessly. Sometimes he sounds like Russel Allen, at other times a more powerful version of James Hetfield.

This continues on in heavy, full metal tracks like Humanoid, but further down the road we encounter more quiet and melodic passages again. The opening of Depolarized is a good example of that. Guitar and keys put down a melody, accompanied by a slightly clattering bass and relaxed vocals, then it builds up into a full metal wall, without losing the underlying melody completely.

Stand out tracks besides these examples for me are The Challenge and 199x, and Oceans Apart. The Challenge is lead by a fast guitar riff and a pulsing double bass drum (Charley Zeleny knows his stuff) after the heartbeat used as intro, that speeds up quickly but always keeps a keyboard melody (Uri Dijk, known from Textures) underneath. After a quiet midsection, the metal march continues and the keyboards have the last word. 199x is the track with most tempo and rhythm changes on the album (I think). The guitar riff is relatively fast, but the drums and synths unadorned give it a slow doom feel at the same time. The melodic midsection is very quiet compared to the rest of the track, and builds up to the metal crescendo ending again. Oceans Apart finally, is a rather melodic and low power instrumental, with orchestral strings (by guest artist Christopher Chaplin) and a fitting guitar solo – an island of peace on this powerful album.

Production wise, like with the artwork, Anuryzm has done a great job as well. With the blasting metal power of the guitars as a basis, it’s not an easy job to make all the instruments have their way, yet John Bakhos and Miltiadis Nicolaos Kyvernitis pulled it off. This is the second album this year I encounter that has a dynamic range of 12 or above – not a measure for production quality, but it does show that the dynamics in the music have survived mixing and mastering.

So, all in all, after taking my time to get used to it, this album is definitely one I recommend to check out if you like what is monikered ‘progressive metal’. Don’t expect the melodies and shredding of Dream Theater, nor the mathematical metal of Exivious or Cynic. This band is somewhere in between, in their own spot.

2 thoughts on “Anuryzm – All is not for All”