About a year ago I was introduced to the magical world of Clanaan, where the chords needed to create music are lost. And they’ve been lost for a while – I think at least two years by now….  Luckily, I know where they are. The missing rider is a man called Darrel Treece-Birch, and he’s using the chords to create beautiful music on any keyboard he can find, together with his friends Alan ‘Spud’ Taylor (vocals), Craig Walker (drums), Gavin Walker (bass) and Martin Walker (guitar). Come to think of it, looking at the names, maybe the next album should be titled The Rider, the Bard and the three Walkers… 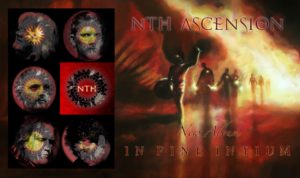 Where The Ascension of Kings was certainly to my liking, I recall challenging the band into taking it another step up on the next one. Time to find out if they did.[acfw id=2]

The opening track Kingdom Keys already shows that if they haven’t picked up that challenge, at least they tried – and succeeded. The track starts rather loud, with big drums, but builds up into a more theatrical piece, with emotional vocals over layers of keyboards – to end in a wonderful, almost bluesy, classic rock guitar lead. And yes, Spud’s voice may be an acquired taste, but I like it more every time. It stands out among other vocalists, as in not being cliché, and he manages to put a lot of emotion into his singing.

He can also do other things – even if he doesn’t have the range of Bruce Dickinson, it’s mainly due to the vocals, and Darrel’s keys that I get reflections of late 80’s Iron Maiden (Alexander the Great, anyone?) on End of Days. It’s not metal, and far more keyboard oriented than, but I do get that image for some reason. The mix of piano and guitar halfway, and the bass in a quiet part add to the score.

Like Vision on the previous album, The Cage seems to tell a story – about war, but also in a way about how our leaders treat their people I think. With a driving drum and bass pattern underneath one of Darrel’s keyboard walls the track has a certain momentum, only interrupted by a slow bass, keyboard and spoken vocals half way, and a dramatic ending. And ending that lyrically makes me think of how we are currently selecting our ‘leaders’, and the way that gets criticised and opposed more and more. Hopeful, yet dramatic:

The World has changed forever, nothing will ever be the same
As the trumpets sound across the earth to warn and to proclaim
Confetti propaganda, falls like autumn dying leaves
And the rhetoric you all believed in the dirt now disappears

And did I skip over So, That was the Apocalypse here? Yes, but only because I was focusing on the tracks that match each other so well on this album. This track stands out among them, because it is completely different. On a radio show chat, it was discussed whether it could be an ode to John Lord. Lots of keys and organ, a biting guitar and a bass that propels everything forward – if not an ode to John, then to his band Deep Purple.

At the end of the album we find the next three pieces of Clanaan, a story that started on the previous album, and that continues here. On In Search for the Rider, the keys (a lot of it piano) lead the way for Spud’s vocal, over a slow, tight rhythm section. Some short melodic patterns, often hardly a second long recur in a recognisable way in between the intricate layers of the keys and guitar, providing a nice coherence to the track. That idea continues in a lesser extend in the instrumental Forever, before the the slow, sad When the Rain Falls leaves the listener longing for the continuation of the story on the next album.

So, is it perfect? No, because nothing is, but Nth Ascension got yet again a bit closer. This music is complex, melodic, emotional and definitely a nice mix of classic rock and symphonic. The Dutch talk about symphonic rock when keyboards rule, avoiding (useless, to my mind) discussions about whether or not it’s prog, and Nth Ascension fits that term very well. Highly recommended.